THE IMPROBABLE RISE OF ASSHOLE ROCK 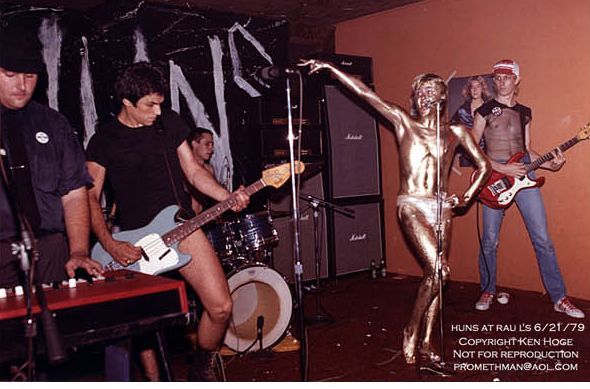 Tom Huckabee is a multi-disciplinary artist, accomplished in filmmaking, photography, poetry, music, journalism, and the plastic arts.   He is a graduate of the Radio-TV-Film program of the University of Texas at Austin, the former drummer and songwriter for The Huns and Reversible Cords, and has made his living in the entertainment business for forty years, including 25 years in Los Angeles as a writer, director, producer, quality control supervisor, and development executive.
Fort Worth native and current resident, Tom was the founding director of the Lone Star Film Festival and helmed his semi-autobiographical feature, Carried Away. He is the founder of GoldAlchemy.ORG, an arts and entertainment co-op from which he offers a wide variety of creative services, including screen writing, script doctoring, research, and event planning—plus workshops and tutoring in story structure and verbal presentation.
This article was written by Tom Huckabee in 1995 and published in Ryan Richardson’s blog/space Break My Face back in 1995, and it remains one of the best first person accounts of a Raul’s figure and a vivid assessment of The Huns. The opinions expressed here are his own! 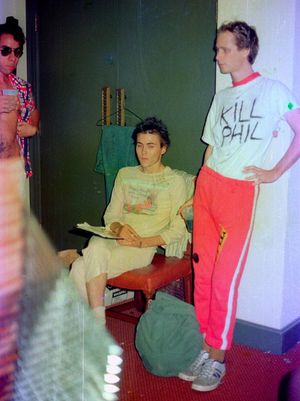 WE WEREN'T PUNKS, WE WERE ASSHOLES. Assholes are punks without a sense of community, without even a punk's code of etiquette or fair play. Assholes are punks whose parents put them through college, pay their rent, buy their instruments and bail them out of jail. Assholes are punks who slag women and minorities. They vote Republican, drive Corvettes and steal things, not because they need something, but because it's a kick to steal. Assholes go on stage late, sometimes hours behind schedule, to piss you off. Assholes preach to their fans, whom they hold in utter contempt. They are musically incompetent prima donnas, who spend more time on their makeup and clothes than on their music. They overcharge promoters and underpay their opening acts. They dress up like Nazis and dine at German restaurants for grins. They screw virgin groupies, accuse them of spreading VD and then sing about it onstage. They break into houses on acid and scare the shit out of old people.

As drummer, songwriter and dramaturge of the Huns, I was there.

After our first show caused a riot and generated gobs of local front page press — not to mention blurbs in Rolling Stone and New Musical Express — we became international celebrities in our own minds. (It doesn't take much to inflate the egos of pseudo-intellectual hicks prone to megalomania). We at arrived at parties early, scarfed the refreshments and split. We booked gigs and didn't show. We insulted friends, fans, other bands, sound engineers, journalists, managers, producers and club owners. (Once, backstage after a show, Joseph Gonzales, proprietor of Raul's, was forced to pull a loaded .38 on our lead singer to rectify a personal slight). We were mean, arrogant, pedantic, petty, pious, selfish, whiny, insensitive, greedy, lying, effeminate, lazy, lecherous, inconsiderate, self-aggrandizing, vindictive pricks. For a brief, glorious period at a little club in Austin we were on top, and the world was our bottom. We had a license, perhaps an obligation, to be assholes.

But the public, which issues sphincter permits, is fickle, and they soon revoked ours. We went from critics' darlings to pariahs within a year, and then spent another year pathetically trying to regain the ground we lost. Bands that we inspired, that followed us at Raul's — the Dicks and the Big Boys for instance — surpassed us by gigging steadily, mastering their instruments and embracing their audience. Gary Floyd and Biscuit Turner were people with whom you'd want to share a beer, people you'd trust with your firstborn. The Huns were boors, backstabbers, wife beaters, bigots, freeloaders, carpetbaggers, perjurers, adulterers, blasphemers, pedophiles, gluttons, Reaganities, public urinators, nose pickers and quitters.

People at the time thought our signature number — the song that got us arrested — "Eat Death Scum", was a daring broadside against the Austin Police Department, when it was really a vile attack on a girl who Phil thought had given him the clap. The only line I can remember is, "I want to bludgeon your pussy with a mace"; so it's just as well that the words were never audible above the din, and that even now it doesn't exist on record.

THE BUST & THE TRIAL

What possessed Phil Tolstead to kiss a cop on the night of September 19, 1978? It was a mad urge, a dramatic notion, an instinct for contradiction, and John Lennon saying, 'Give me a kiss' to a bobby in Hard Day's Night. Most newspapers at the time described it as an attempted smooch; but I'm telling you it was full lip-to-lip contact, however brief, which caused the chain reaction that ended in a police riot and the beating and arrest of several of our friends and fans. Phil's charges were disorderly conduct, resisting arrest and abusive language. No mention of forcible osculation.

At the trial, it appeared that we lucked out, when the hirsute Steve Russell, ex-campus radical, — the most liberal judge in Austin — was appointed to adjudicate. All Phil had to do was lay low, and he'd walk. The proceedings began with testimony from punks, cops and barmaids, followed by expert witnesses. A prof from the UT music department validated the artistic legitimacy of our music (how dare him!), and another Ph.D. from drama testified to the delicate contract which had been entered into between performer and audience at Raul’s — and the inappropriate violation of that covenant by a third party (the police).

Just as Russell's bleeding heart was about to break in our favor, Phil launched into an incoherent discourse on Antonin Artaud's Theatre of Cruelty. Somehow that prompted the justice to make reference to his glory days in the sixties, to which Phil sneered, 'I hate the sixties.' All semblance of jurisprudence went out the window as defendant and magistrate hotly debated the merits of the Woodstock generation. The hippy found the punk guilty of disorderly conduct and fined him $53.50. Later that winter at a separate hearing before another, less progressive judge, Phil was found guilty of resisting arrest, charged $2,000 and sentenced to jail. He appealed both convictions.

The case went as far as the Texas Court of Criminal Appeals, and as late as 1983 Phil's lawyers were dreaming they had a first amendment ride all the way to Washington. Who could blame them? They'd been working for free for five years. But after Phil's conversion to fundamentalist Christianity, he pulled the ultimate boner, changing his plea to guilty and abandoning the appeal process. I'm not sure what happened after that, I guess he got probation.

The original lineup of the Huns was Phil Tolstead (vocals), Dan Transmission (keyboards, vocals), Joel Richardson (bass), myself on drums and Manny Rosario on guitar. Manny was a tough-talking, paranoid Puerto Rican with an inferiority complex. He tended to write sincere, iconoclastic punk anthems, ripped riff-by-riff from other artists (usually the Buzzcocks). Punk rock was his savior, and he considered himself one of only a handful of authentic punks in Austin. Faster-shorter-louder was his mantra. He would threaten to beat us up when we veered from the party line. 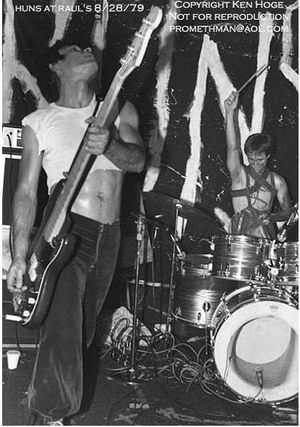 Manny was the only band member who went to Phil's aid during the bust. With his guitar as a cudgel he smashed the radio out of Officer Bridgewater's hand as he was calling for backup. The bluebelly parried with his blackjack. Manny sailed backwards, hit the floor and sat up with Tweety Birds circling his head. He made a beeline for the back door, hopped the fence and called us from Florida the next day, convinced that if he'd stayed he would have been fish bait for the A.P.D. He snuck back into town just in time for our second disastrous gig at the Union Ballroom 21 days later. He joined us for only one more show at Raul's, where he abandoned the stage mid-set in disgust at Phil's drunken antics, and then divorced us for good over creative differences. Manny was a punk, not an asshole; so he didn't fit in. I was sorry to see him go. The rest of us couldn't play.

It took a while to find a replacement. Not just anyone was worthy to call themselves Hun. Phil anointed John Burton, an excellent drummer and Judas Priest devotee, who longed for the extra attention afforded guitarists. Although he'd only recently acquired his axe, John was destined to be one of us, based on his personality (perfect asshole) and looks (6' 3" with a face like Boris Karloff. He was a gadget freak and his mother bought him whatever he wanted. His four Marshall amps are still ringing in my ears.

A member of the audience at our second show told a reporter, "These guys would be nothing if it wasn't for the cops." How right she was; we sounded like the Pistols with Sid on every instrument. But then our mission wasn't musical; our mission was to stir the shit, cure boredom and strip the gears of musical privilege in Austin, represented by the folk, blues and cosmic cowboy oligarchies.

Each of us had less than six months experience on our instrument. We learned to play on stage, like an anxiety dream. We didn't write songs, we wrote bumper stickers: Eat Death Scum, Kill All Men, Legalize Crime, Fuck Mommy Kill Daddy. Only John's four amps and flange covered the rinky-dink quality of the rest of our equipment.

The guarantee that we'd never be musical, no matter how much we practiced or upgraded our gear, was the indisputable fact that Phil couldn't sing. He was a master of prance and patter, maybe the best I ever saw, and looks-wise he was a regular punk poster boy, but he was behind the door when they passed out the pipes. Once at a band meeting I suggested that he lip sync and let Dan (who had a voice like Pavarotti) sing lead, but it never came to a vote.

It's just as well that we never put out a studio LP. The Huns were psychodramatic chthonian performance art; and the gauche and vulgar, spectacular meaning of it all could only be fathomed live. Like Kiss, Bonzo Dog Band, Gwar, Devo, The Tubes, Uranium Savages, or GG Allin, we were capable of evoking a unique, transcendent experience for our audience and ourselves. On the eight or nine occasions when the alchemy really worked, we bore a hole to hell and stole the devil's own fire. Otherwise, we sucked.