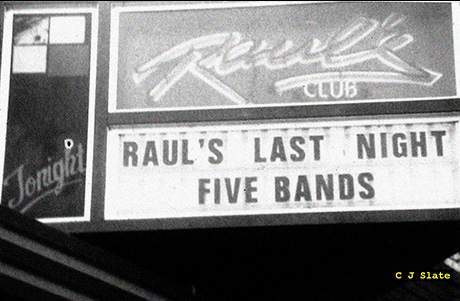 The best – and probably only – written account of the April Fool’s Day, 1981 closing show was penned by the founding music editor of the Austin Chronicle, the late, great Jeff Whittington (1955-2001). The Daily Texan article’s headline summed it up pretty well – “RAUL’S ENDS ERA WITH BLOW-OUT: SLAM DANCING, REVELRY, ANDROGYNY RULES.”
It was no secret the club’s days were numbered, and the punk and new wave community wanted to go out with a bang. Competition grew: Duke’s Royal Coach Inn was in full swing, and Club Foot, formerly the Boondocks Club and Crazy Bob’s Saloon among other monikers, had opened a few months earlier in late 1980.

Raul’s actually closed twice. The first time was February 29, 1980. As Whittington recounted, the first closing was “pretty frightful – all of the would-be trendies and Izod wearers who never had ventured into the club before showed up just so they’d be able to tell their grandchildren that they had been there. It wasn’t until near the end of the evening that a quorum of Raul’s regulars managed to shoehorn themselves in.” The featured acts were The Delinquents, The Mistakes, The S.K.P.s, and The Next. It happened pretty quickly, and I wasn’t there to see it. Joseph Gonzalez and Roy Gomez washed their hands of the club, and a few weeks later it reopened under new management. 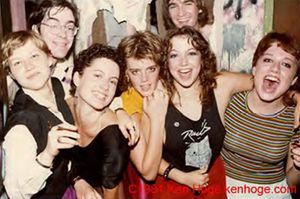 Re-opened by Steve Hayden on April 4th, 1980, the Punk vs. New Wave schism reached its peak. It had been pretty amiable before then, but the bands that were becoming edgier and angrier allegedly unsettled Hayden. In David Dictor’s book Memoir from a Damaged Civilization, Dave exposed the cracks. “Black Flag came to town, and some friends and I were slam dancing. Steve Hayden told me to stop or I’d be banned from the club. I friendly mock-pushed him, and he got his bouncer, Tuck; they escorted me to the door, and I was told that I was officialy,”Banned from Raul’s for life.”  The club was gone a few months later. I think Dave liked the club, but didn’t like the policies. I saw Dave’s first show at Raul’s in his band the Stains, later renamed MDC. Dave moved to the west coast and became an iconic Hardcore frontman, as most of us know.

The club wasn’t quite the same under Hayden, but us regulars never wanted the party to end. The party ended almost exactly a year later on April 1, 1981. Raul’s closed its doors forever that night, following performances by the Reactors, the Next, the Big Boys, the Inserts, and Really Red from Houston.

I don’t know why, but I don’t remember a poster from the April 1 show. Leading up to it, however, were two incredible nights of great music. “THESE ARE THE LAST DAYS,” read the poster announcing the third and second to last shows of Raul’s. Those two nights were a Monday and a Tuesday, March 30 and 31. 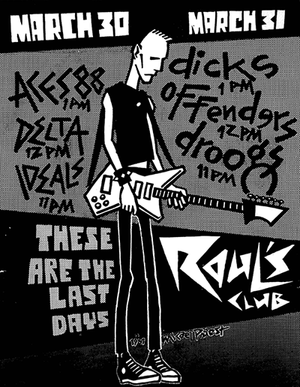 The poster, by venerated Austin artist Micael Priest, featured a caricature of a lanky punk in Chucks and pegged jeans. It had the unique problem of serving all the listed bands. According to Priest, the figure with guitar was an ‘everypunk’ and was meant to represent all of the acts lined up for that weekend.
Monday, March 30, featured the Ideals at 11pm, led by guitar wizard Davy Jones and the Hays brothers, Richard on bass and Arthur on drums. All three were ex-members of The Next and played together on and off for many years, especially the Hickoids. Billing themselves as “The Poor Man’s ZZ Top,” unka punks will remember the Ideals as 3-piece psych, country and, blues-rock, encased in full on punk anger. The art-synth group Delta performed at midnight. Delta accompanied dance performances by Austin choreographer Dee McCandless and was made up of Gene Menger on the synthesizers; Jonathan Hearn on guitar and Randy Buck on bass. Aces 88 closed the night, starting at 1am. Aces were staffed by Terri Lord on drums, Dave Daucett on bass, Charlie Mac on guitar, and Brad Orgeron on guitar.

Tuesday, March 31, was the less wavy night. The Droogs opened at 11pm. The power punk three piece was Lee Shupp on bass, Alin Black on guitar, and Matt Stevens on drums.  The Offenders, soon to be Hardcore avatars, followed at midnight. Pat Doyle on drums, Mikey Donaldson on bass, Tony Johnson on guitar, and Mick Buck on vocals. [John “JJ” Jacobson followed Buck on vocals later in 1981]. The Dicks closed at 1am. Gary Floyd, Buxf Parrot, Pat Deason, and Glen Taylor pulled out all the stops.
All three bands were high energy and made it a very memorable night.

The actual, total, forever, final night, April Fool’s Day, 1981, was drawn in rich colors by Jeff Whittington. “This time, the place belonged to the regulars from the word go. In fact, a pleasing cross-section of the club’s population from the Olden Days to the present showed up for the final blowout.”

Truth in advertising: I wasn’t there! I was there for Monday and Tuesday shows, but not the final one. I can’t even remember why, but being a year out from finishing high school and being underage probably had something to do with it. I couldn’t get into every show. I did stop by that afternoon, talked to Ty Gavin, and took a few photos to document the day. You and I will have to rely on Whittington’s account.

The Big Boys opened, having played their first show at Raul’s in 1979. The last song of their set was their ode to the annoying, taunting frat brothers of the West Campus neighborhood, “Frat Cars.” I won’t go a lot into the Big Boys here, since I could write a dissertation on them.

The politically blunt and always engaging Really Red followed. “Theirs was music to bang heads by and segued nicely into the sledgehammer music of the Inserts.” Whittington’s description of slamming is epic: “Eventually, the shock waves reverberate off the walls and the front of the stage, creating a complex matrix of action/reaction that reminds botany majors of Brownian motion, chemistry majors of kinetic energy and James Robison of Gomorrah-on-the Colorado.” [Echoes of Lester Bangs here?]

Inserts shows were always memorable, one of the tightest local bands to play Raul’s. They were a well oiled machine, with the charismatic Billy Pringle throwing in a jumping split at unexpected moments to everyone’s amazement. 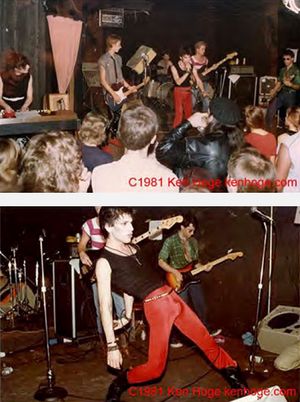 The Next, survivors from the very early days of Raul’s, played next in their latest incarnation. Whittington heaped praise on singer Ty Gavin. “If anybody at Raul’s ever had Star Quality, it was Gavin; he always struck me as the kind of performer who should be playing in front of an audience of 10,000, with hundreds of teen-age fans waiting for him after the concert…who needs wimps like Steven Tyler and sociologists like Johnny Lydon when there are Ty Gavins in the world?”

The Reactors closed, the last band to play Raul’s. Mike Runnels, previously in The Mistakes, is and was a great showman. Reactors songs, tense and edgy, were a perfect ending. Whittington: “They played until well after 2am, and when they left the stage the audience refused to leave. One of the resident authority figures at Raul’s started to dismantle the sound equipment, and for his efforts was greeted with a fusillade of beer cans.”

The ritualistic destruction at the bitter end was documented by Ken Hoge’s vibrant images. As the night wore on, the graffiti increased, as did spirited vandalism. The hole in the sheetrock separating the bathrooms – starting a day earlier - was finally obliterated and breached, wild eyed and liquored up attendees turning two necessary rooms into one. “When the wall came down, androgyny ruled; and people of each respective sex got to read the graffiti in the restroom of the opposite sex (lots more in the women’s room because there were more walls). Unfortunately, there were so many layers of graffiti through the years that it was hard to read anything.”

There will definitely never be another Raul’s.